This coffee-table book of photographs documents Silicon Valley’s rise from the mid-1980s to 2000, in vivid, candid, unposed black and white. It features photos of many of the famous key players of the time, as well as photos of those whose contributions did not receive the attention they deserved. Steve Jobs is there, of course, (the beginning of the book is devoted to the creation and launch of the NeXT computer), as are Marc Andreesen, Steve Capps, Susan Kare, John Warnock, Clement Mok, Ross Perot, and even President Clinton (along with many more). Far from “glamour shots,” these photos capture reality, with all of the intensity, exhilaration, and exhaustion that was everyday life for those who sought to change the world– and did.

Menuez’s captions, and especially his thoughtful assessment of the evolution of the industry, are valuable additions. You can see some of the pictures, and their captions, on the Fearless Genius website. With the photographer’s permission, some of my favorites are presented here.

Steve was a consummate showman who understood the power of a compelling setting. This was never more apparent than at this incongruously formal lunch he hosted for Ross Perot and the NeXT board of directors in the middle of the abandoned warehouse he planned to turn into the NeXT factory. He told Perot that they were building the most advanced robotic assembly line in the world and that “no human hands” would be assembling hardware. He predicted that NeXT would be the last billion dollar a year company in Silicon Valley and that they would ship ten thousand computers a month. Perot, who was then championing a movement to reform education in the United States, was blown away by the presentation and invested $20 million, becoming a key board member and giving NeXT a crucial lifeline.

Susan Kare Is Part of Your Daily Life. Sonoma, California, 1987. 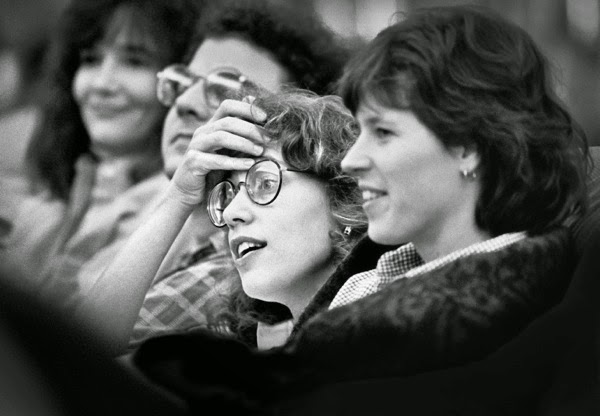 It’s not a stretch to say that Susan Kare’s playful icons and user interface design have impacted the daily lives of hundreds of millions of people around the world. Susan was part of the original Mac team and designed the original Mac icons and much of the user interface. Leaving Apple with Steve after his ouster, she became a cofounder and creative director at NeXT Computer, where she oversaw the creation of its icons and logo, working with the legendary Paul Rand. Later she designed or redesigned icons for many other computer operating systems, including Windows and IBM’s OS/2. Here she’s listening to Steve at an off-site meeting with her colleague Kim Jenkins (right), as he discusses the unfinished tasks facing the company. Kim, a key member of the marketing team, came to NeXT from Microsoft, where the education division she started was profitable beyond anyone’s expectations, giving real competition to Apple, which had previously dominated the education market.

Steve lists the workflow ahead for his team at a company meeting at a Sonoma resort. His outline included everything that remained to be converted from analog to digital. Indeed, everything in the world that was not by then digital would soon be, as the digital revolution raced ahead.

During his reelection campaign, President Bill Clinton attended a fund‐raiser thrown by the top CEOs of Silicon Valley. L. John Doerr (center), interacting with Clinton, helped organize the visit at the home of Regis McKenna. During dinner, the CEOs peppered Clinton with questions related to complex technology, trade, and economic issues. Listening patiently, the president smoothly delivered a point-by-point response to each guest in turn, revealing a jaw-dropping breadth of knowledge about all the issues, even obscure aspects of encryption technology. Everyone pulled out his checkbook and donated generously to the campaign.

This introductory video, featuring the photographer himself, is well-worth your time. In it, Menuez explains how the project came to be. The video includes several photographs from the book as well as others that for one reason or another did not make the cut.

I enjoyed this book very much. Recommended.

Available in hard-cover or as a Kindle book. Also available from Apple’s iBooks store*.