When Apple introduced “Apple Watch” last September, I was more than a little skeptical. Here’s what I wrote back then:

“I usually don’t generalize but there are two kinds of people: those who wear watches, and those who don’t. This is going to be interesting to watch (pun) because anyone who wants to wear a watch, and has the money to buy a $349 Apple Watch, probably already has a fancy watch on his wrist, and if there’s one thing I know about “Fancy Watch Guy” it’s that he likes the watch he has now. I suppose we may see people wearing two watches at once. Otherwise there are going to be a lot of Rolexes gathering dust on the dresser.

The people who don’t wear watches have their reasons, and those reasons will still be there, Apple Watch or no. For example: I keep banging it on things, it catches on stuff, it’s too bulky, I’m afraid of losing it, if I want to know what time it is or to send a text message I just pull out my iPhone.”

(Here’s a link to the whole article, if you want it.)

I am pleased to announce that even at 52 years old I am open to changing my mind. And, when it comes to Apple Watch, I’ve changed my mind. Careful readers may recognize that, in September, I was making the same mistake with my assessment of the Watch as I did with the original iPhone. I was thinking “the Apple Watch is a watch, and I don’t need a watch” the same way I thought “the Apple iPhone is a phone, and I don’t need another phone.”

Of course I was wrong about the iPhone, and I was wrong (but am no longer wrong) about the Apple Watch. Both devices are both poorly named: the “watch” part of Apple Watch– that is, the time-telling part– isn’t the important thing, just as the “phone” part of the iPhone doesn’t describe 90% of what we do with it. I’m now thinking of the Apple Watch as “a super-portable computer/communication device that is always with me, literally no more than arms’ length away, that adds value to the iPhone and (by the way) also tells the time” in the same way that I now think of the iPhone as a hand-held computer/iPod/web browser/email machine/address book/camera that also makes phone calls.

If I look at it that way– that is, if I think of Apple Watch as a super-portable computer/communication device that is always with me, literally no more than arms’ length away, that adds value to the iPhone and (by the way) also tells the time– $349 for the low-end model is palatable. Three hundred and forty-nine dollars for a watch? Out of the question (for me). But $349 for a clever device that adds value to my iPhone, frees up my hands (because I don’t have to pull out my phone), and makes things a little more convenient for me, many times a day? And it tells the time? AND you can set the watch’s face to be an animated, toe-tapping Mickey Mouse (among many options, but why would you need them)?

Need more convincing? OK. As with the original iPhone, Apple’s made a bunch of apps that take advantage of the new hardware. Take a look at these Apple apps that come pre-installed on Apple Watch.:

You can read more about the above, and see little movies about them, by visiting this page on Apple’s site. Note also that, unlike the original iPhone, Apple’s opened up Apple Watch to app developers, and many 3rd-party apps will be available on Day 1 (April 24th, 2015).

Apple Watch has to be paired with an iPhone. The description at the Apple site says “Requires iPhone 5 or later running the latest version of iOS” so plan on buying an iPhone at the same time, if you don’t have one that’s new enough. Interestingly, it turns out an iPhone is better when paired with Apple Watch. For one thing, Apple Watch brings Apple Pay to iPhone 5 and 5s owners (previously, you needed an iPhone 6 or 6 Plus for Apple Pay). I would bet there will be other interactions and I will tell you all about them once I get my own Apple Watch. It’s going to look a lot like this one: 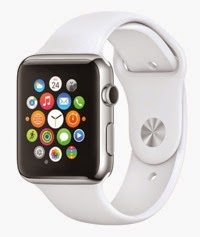 I was thinking today about how we want everything, all at once. For example, we want our iPhones to be really small, so they’re really portable. At the same time, we want them really big, so they’re easy to use, with big screens and big buttons. But, no matter which size Apple gives us, the iPhone’s size is always a compromise– a trade-off between portability and usability. Apple Watch, as a companion to the iPhone, changes things. Now, instead of trying to make one device (the iPhone) simultaneously small and large– very difficult– Apple’s solved the problem by introducing a second device (Apple Watch). Very clever. And a lot easier than breaking the laws of physics.

And I’ll be thinking of it as a super-portable computer/communication device that is always with me, literally no more than arms’ length away, that adds value to the iPhone and (by the way) also tells the time.